Movie Review: Dora and the Lost City of Gold

Movie Review: Dora and the Lost City of Gold 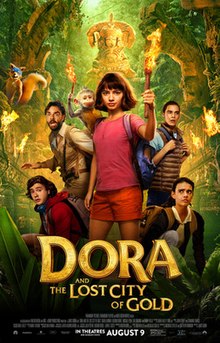 Dora and the Lost City of Gold is a live-action of the Dora the Explorer Cartoon adaptation. The story opens with Dora and her cousin Deigo playing when she is six. However, he and his family are moving from South America to California.

Ten years later, Dora gets sent to his school and doesn’t fit in since she’s been in the jungle and homeschooled her whole life. Deigo struggles to support her when doing so could get him ostracized.

When Dora, Deigo and two of their classmates get kidnapped and told they must find her parents and get them to take the mercenaries and treasure hunters to Parapata – the adventures begin anew.

I really liked this movie and thought the actress Isabela Moner as Dora carried the entire movie. Also liked the salute they often did to the cartoon shows.

Two things I didn’t like were the ‘naked’ cartoon scene with Eugenio Derbez as Alejandro Gutierrez. I felt like it wasn’t necessary and they could’ve just kept him in his underwear. They didn’t show anything, except a butt, but the implications were crude in my opinion. I also didn’t like the ending with the gold statue in Dora’s parent’s possession without any explanation of why they had it when they state they aren’t there for the gold or are treasure hunters, but are only explorers and there for the adventure.