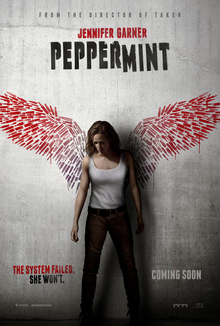 Peppermint is a 2018 Vigilante/ Revenge movie starring Jennifer Garner. Jennifer plays Riley North a wife and mother to a 6yr old girl who are middle-class Americans. Her husband almost goes along with a co-worker to steal from a gangster. However, the gang leader doesn’t care that he wasn’t involved and guns down Riley’s husband and daughter.

Riley then goes on to extract her revenge, killing whoever gets in her way.

Also, the ending was a bit anticlimactic when Riley kills the gang leader in the end. Overall though, not a bad movie. If you like Punisher’ style movies, then check out Peppermint.