I wanted to be an FBI agent, investigate crime, catch the bad guys, and make them pay for their misdeeds.

So I joined the Air Force. I earned my MBA. I’ve always been a good shot. And then I applied to the FBI in Miami to be an agent.

Unfortunately, I have a hearing disability from the time I was in the Air Force thus my application was turned down. For the record, my hearing wasn’t nearly as bad as it is now when I applied.

I was very disappointed and I still longed for action and adventure. I still wanted to be a kick-ass heroine in a Marvel movie.

Since I couldn’t wear a badge in real life, I started writing and creating kick-ass heroines in several of my books and living vicariously through them.

In my current release ‘Her Men’, Julie is an ex-FBI agent who is now a small-town sheriff. She’s living the life I wanted. She’s me in another universe.

In one of my former stories, ‘Purrfect Justice’, Haley tried to join the police force like her father and brothers but was turned down because of a physical disability. Not fully deterred, she works as a secretary in the police station and listens to the police scanner during her free time. When she hears that the police officer that she loves is in trouble, she takes it upon herself to save him—and it becomes a habit.

How I would love to be Julie or Haley. When I write about them, I become them, if only for a short time. I get to live through them. The same happens when I read about other endearing heroines that other authors create. I suppose that’s why we readers love to devour so many awesome books. 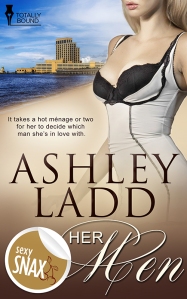 Forty-four year old Julie Weston has loved Timmy and James since her college days twenty something years ago. She’s fantasized about both all these long years, never able to choose between them.

Hoping Tim and James will attend, she attends their college marching band reunion. When both men show up her dreams are answered. They’re sexier than she imagined and she hopes they won’t be disappointed by her older self.

It turns out both men came just to see her again and neither is happy about the other’s presence. They fight over her, confusing her more than ever. It takes a hot ménage…or two…for her heart to decide which one she’s in love with.

“I’m so hungry—for you.” Tim twisted her hair in his fingers and pressed his lips to her forehead. “And I’m so hot, if you know what I mean.”

“Me too.” She was glad for her buzz, for the courage it provided. She longed to kiss him, wondered why he hadn’t kissed her yet.

A shadow fell between them and James grabbed her away from Tim. “I’m breaking in. You’ve monopolized her all night.”

“But you don’t dance. You don’t like disco,” she blurted, surprised but thrilled.

“I do now. If it’s the only way I get my turn to see you, I’ll dance all night. I’m tired of waiting for you at the table.” James tugged her into his arms, ignoring Tim’s deathly glare.

“One dance, then I’m coming back.” Tim stalked away and grabbed a drink, which he downed in one gulp.

“Thank you.” She wiggled beside James hoping she could make him as hot as she’d made Tim.

“For rescuing you from Tim? You didn’t look as though you wanted rescuing.” James held her close but his nostrils flared and his eyes narrowed to mere slits.

“Not for tonight. For all those years ago you told him off for abandoning me. I wish I’d known. I also wish I’d done this.” Before she could lose her nerve, she pressed her lips to his.

He pulled back and gazed into her eyes, suspicion in his. “Are you drunk?”

Hurt and embarrassed she held up one finger. “I only had one drink. And I kissed you because I’ve wanted to do so for many years and I don’t want to let you go again without you knowing that, without knowing what it feels like.”

A low growl rumbled from James. Desire lit his eyes. Purpose firmed his lips. Without another word, he lowered his head and kissed her deeply, thoroughly.

He tasted so good, like steak and Cabernet and she couldn’t get enough. Her legs rubbery, about to give out on her, she clung to him. Her heart seemed to swell to triple its normal size. James’ was robust and passionate and full of pent-up longing.

“You wanted to kiss me too, all those years ago,” she muttered, touching his lips. It wasn’t a question. He tasted too good, was too mesmerizing to move away from.

“Yes.” The answer was long, drawn out and breathy. Full of emotion.

Ashley Ladd is a disabled Air Force vet that is hard of hearing but still loves language, especially the written word. She loves a sexy man, especially one with a military background and they’ll often pop up in her stories. She also loves cats and has been known to empower a cat with the gift of speech. Unfortunately he wouldn’t shut up. 🙂 She loves to plug into Pandora and sip Diet Coke while writing, usually with a cat or kid at her side.