Fantastic Beasts: The Crimes of Grindelwald 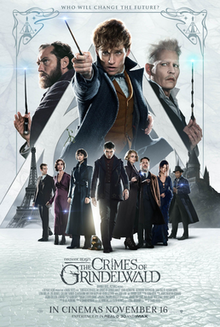 Fantastic Beasts: The Crimes of Grindelwald is the sequel to Fantastic Beasts and Where to Find Them. This is the tenth movie in the Harry Potter world and the script was written by J.K. Rowland.

The film is set in 1927, where the Magical Congress of the United States of America (MACUSA) is transporting the powerful dark wizard Gellert Grindelwald (played by Johnny Deep) to London to be tried for his crimes. Grindelwald escapes and sets up headquarters to recruit Credence to his cause.

Credence was in the first film as a young man who has tried to suppress his magical abilities.

Newt and other characters from the first film return to find Credence and stop Grindelwald. Though I love Newt’s character, this film has him playing more of a magical Sherlock Holmes character that wasn’t in the first film so it was a little off-putting to me. However, I really enjoyed the movie overall.

The special effects are fabulous and the acting (especially Depp and Law) are amazing. But the film/story feels rushed. It’s missing the heart of the first film but is still an enjoyable movie. And if you don’t like cliffhangers, maybe wait until the third movie comes out.  The third film is set to be released on 20 November 2020 and there are rumored to be five films in all in this spin-off series.