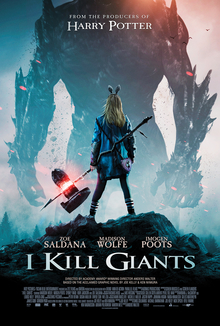 I Kill Giants is a fantasy drama based on graphic novels created by writer Joe Kelly and artist J. M. Ken Niimura.

Barbara (played by Madison Wolfe) is a self-sufficient teenager who lives with her brother and older sister, Karen. In order to escape reality, she creates a fantasy world inspired by her love of Dungeons & Dragons and former Phillies pitcher, Harry Coveleski. Believing that giants from other worlds are wanting to attack her hometown, she spends her days creating weapons and traps to fend off the creatures.

Sophia, a new girl from England becomes her friend, and along with the new school psychologist, tries to help her.

I really liked this movie. It reminded me a bit of The Bridge Terabithia but with a much, much better and happier ending. So if you liked Terabithia, you’ll love I Kill Giants.