Movie Review: The Nutcracker and the Four Realms

Movie Review: The Nutcracker and the Four Realms 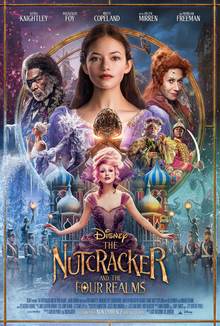 The movie takes the story of the Nutcracker and brings to life a new tale with the Four Realms and Clara, who has lost her mother.

I was really excited to see this movie as the trailers were fantastic. However, it left a lot of questions unanswered including depth of Clara and the other members of the Four Realms. Loved Jayden Fowora-Knight as the Nutcracker/ Captain Philip Hoffman.

The ending was too short and easy as well. What could’ve been an awesome story seemed to be a lot of fluff and little substance. For example, Clara is supposed to be super smart and a wiz at science and physics. Yet, she uses very little of it during the movie or the ending. Which I would’ve thought she’d have bigger challenges and difficulting beating the bad guy instead of such a simple solution.

I’d have liked more information about her mother too. Why didn’t she tell her family about the Four Realms? Why never mention them to her daughter?

Not a terrible movie, but don’t expect a deep story.