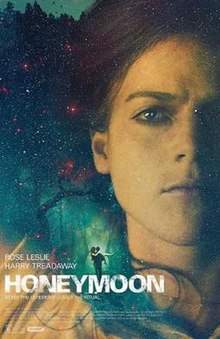 Bea & Paul are on their honeymoon and have decided to go to her family’s summer cabin in a remote part of the country surrounded by woods and a lake. At first, the newlyweds are happy and enjoying their stay.

Then, Paul wakes up extra early to go ‘catch a fish’ for their breakfast and realizes the alarm went off too soon. He goes back in the house to find Bea gone. He searches for her, finally finding her naked and cold in the woods.

Taking her home, she tells him she was just sleepwalking and has no recollection of how she got there or why. For a while, things are okay. But soon, Bea starts acting bizarre. She starts forgetting things, refusing to be intimate, and lying.

Paul figures out that something is wrong and confronts her. But Bea is not who she was when they came.

I can’t give away too much. I did feel like this horror movie rushed things – especially the end. Once Paul knows more is wrong with his wife than he thought, he delays. Instead of running and escaping, he hesitates. In the end, he seems way too calm to me.

An interesting tale, but I think the suspense and horror could’ve been slowed down a bit as the ending felt rushed.