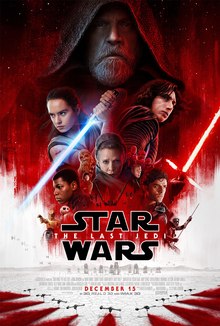 Characters from Star Wars Episode VII return along with some of the charm and humor.

Rey has traveled to Luke Skywalkers’ recluse island and given him back his lightsaber along with the request to train her and return to the rebellion.

(Side note: Luke’s island is a real location: Skellig Michael in Ireland)

There are plenty of twists in this movie. Although some a lot more predictable than others. However, overall I really enjoyed the film. Some critics have said it’s on par with The Empire Strikes Back, I disagree. I would put the movie under TESB and the original Star Wars movie, but above Return of the Jedi.

Episode IX, the final installment of the sequel trilogy, is scheduled for release on December 20, 2019.[1]