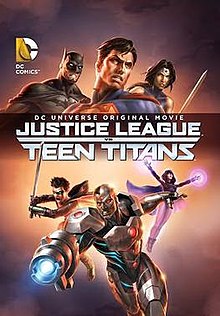 The Titans have grownup, well some of them. Cyborg, Robin (now Nightwing), and Starfire are adults. The new Robin (batman’s son), Raven and Beast Boy are teens.

Raven’s father, an interdimensional demon, has escaped his crystal prison and uses Raven as a conduit to enter earth. No one can stop him, not even the Justic League.

Overall, I enjoyed the movie. The ending was a little forced and campy, but still a good storyline.

Stay tuned after the credits to see Terra approaching Titans Tower, riding a boulder across the sea.