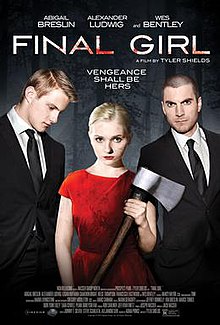 Final Girl is an American action thriller horror film directed by Tyler Shields in his directorial debut, written by Adam Prince, based on the story by Stephen Scarlata, Alejandro Seri, and Johnny Silver.[1]

As a young child, Veronica’s parents have died and she meets William who tests her. She passes and he asks her if she’d like to come with him to learn about things other people don’t.

This movie had a great premise but fell short in the delivery.

How is it that William has had her and ‘training’ her for at least eight years, yet has to show her choke holds? She should already have fighting skills and knowledge. She should be able to put a person down a hundred different ways regardless of their strength or size.

The movie plays on her infatuation with William, but I’m left wondering what the heck he did with her for eight years that she has to differ to him on how to do basic skills.

Also, I didn’t like the use of the drugged alcohol (except at the end) for the four guys she goes after. It’s almost like they had to be tripping in order for her, a woman, to beat them. Their ‘greatest fears’ were silly (again, except the last bad guy).

This movie would’ve been better, in my opinion, if they had shown her training as a kid/young teen. Not drugged the bad guys, and actually let her fight and kick butt and do what she could as a secret agent/ assiasn/ whatever.

If the movie had used a bit more like the movie Morgan, it would’ve been riveting and more believable.