My sexist vacation, so far, was when my husband and I won tickets to Hawaii. One day though, I’d like to travel further like my character Renee to Turkey and see the ancient ruins.

If you desire a letter of recommendation to host your own expedition, Renee, you’ll get off your ass and be ready to leave for the hot air balloon ride.”
She glared. If she’d been a gorgon, he’d be stone.
“If I do this,” her amber eyes glinted in the sunlight, “you will not only give me an honest recommendation, but Cynthia’s personal number so I may call her myself. Then Travis takes me into town as soon as he arrives.”
“Done.” He grinned. “Now clean up before I add more than a balloon ride to my side of the costs.” 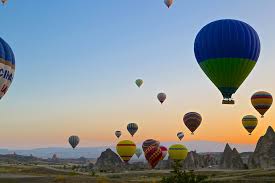 An hour later, the balloons arrived. Carla and Renee were in one, the other members of his team divided among the other three. He guessed it wasn’t Renee’s choice for him to ride with them, but too bad. The other baskets were full.
“Ready sir?” the balloon operator asked.
Damon hopped over the rim. “Let’s go.”
The hiss of the gas made the basket lurch as the operator flipped on the burner. Renee’s stance softened as the ground drifted away. Carla grasped the side of the basket and began to talk nonstop to the operator.
“Have you ever been on a balloon ride before?” Damon asked Renee.
“No.”
They pulled away from camp, the tops of the trees drifting away below them.
“Then I guess it’s good I ordered the ceremonial champagne.” When she arched an eyebrow, he held his hands. “It’s tradition; first balloon ride calls for a glass of champagne. Not my rules, right operator?”
“Yes, sir.”
“You probably paid him to say that.”
“No, he’s telling the truth.” Carla came up beside her. “I’ve flown once with my cousin.”
“How much did you have to pay Carla?” Renee asked.
Damon laughed as he dug through the picnic basket and drew out the plastic champagne glasses. “We’ll wait until we are over the fairy chimneys then we’ll have our toast.”
If they rode in balloon alone, he might have been too tempted to kiss her. That kind of thinking was dangerous.

Sign up for Andrea’s newsletter not to miss the new paranormal romance series, Claimed.