I finally watched this terminator movie. Parts I liked others, seemed forced. 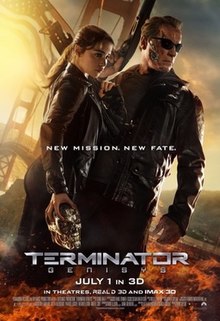 It’s a re-write of the terminator series – with changes done in timeline – so it starts with a young Sarah Conner.

In this version, she already knows all about terminators, in fact she’s been protected by a T-800 since she was nine and has raised her.

What I liked: that Sarah was trained and knew what she was doing even moreso than Kyle.

Arnold Schwarzenegger in character smiling for a mug shot – priceless.

What I didn’t like: A key character becoming bad with no hope of salvation or change.

A bit of confusion on what was happening with Kyle.