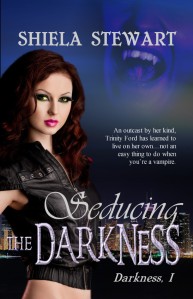 Have you ever read a book and wondered who the person was who wrote the book, what they’re like? I have. Thanks to the internet we can search them out and find out little things about their life outside of writing. It made me think that my readers might get a kick out of learning some things about me. So here are ten facts you might find interesting.

1: I am obsessed with the TV series, Supernatural. I have watched every episode. Now that its on Netflix I can binge watch all  want.  I count down the days until its on and if anyone dare talk during the show I get very angry. I even have a facebook page dedicated to those who love the series as much as I do.  https://www.facebook.com/groups/SupernaturalAddicts1/

2: My house burned to the ground when I was seven. We lost everything and my mother had third degree burns on both her hands and arms from going into the house for our belongings.

3: I’m Bipolar as are my oldest son and my daughter.

5: I have eaten chicken hearts, chicken feet, pigs feet and cow brains. And lived to tell the tale.  I will never eat those things again.

6:  I learned how to ride a horse when I was nine and never once did I get bucked off. My little sister was not so lucky.

7: I can cross one eye while the other stays straight. Freaks my husband out. LOL

8: I saw my very first horror movie when I was seven. I tiptoed from my bedroom and snuck down the stairs. I heard my parents watching a movie which was fairly loud and I just had to see what it was. The movie was called Straight Jacket and was about a mentally disturbed woman who ended up killing her husband.  I watched for a good fifteen minutes until I was caught. That was the start to my desire for scary movies.

9:  The movie that tipped it over the edge and made me a horror lover was Stephen King’s Coujo. My sister took me and my little sister to see it in the theatre. I was thirteen and my older sister was nineteen, my younger sister was nine. Clearly we were too young for the movie, but that was part of the thrill. I loved the movie. My younger sister did not. Walking home after the movie, we passed a used car lot which was surrounded by a chain link fence. It was after ten and we were all a little jittery. The next thing we know a huge husky jumped on the fence, barking, and scared the shit out of us. Best moment of my life. My adrenaline was pumping.

10: I own six cats, a red eared turtle and a black lab. As well as several fish. I’m called the crazy cat lady which I’m proud of. Because of my Supernatural obsession, I’ve named two of my cats two characters from the show. Castiel and Meg. Castiel is an angel on the show and Meg is a demon.

So there you go. Now you know a bit about me. I hope you enjoy my books.

An outcast by her kind, Trinity Ford has learned to live on her own..not an easy thing to do when you’re a vampire.

Trinity was once a fragile girl. Being taken by a powerful vampire prince changed her, Discivering gin in the arms of another  woman changed destiny. Alone, she’s earned fast how to be tough, how to survive, and how to protect the people of her city from the evil that lurks in the dark. She was managing just fine, until Basil walked back into her life.

Basil Hawthorn has been the reigning prince of vampires since banishing his father to the Realm of Dark Mystics decades earlier, When a perfect dream makes him realize Trinity is at risk, he decides the only way to save her is to push her away. Doing so is not easy. Trinity is the only woman he has ever loved, ever will long and he can’t seem to let her go.

When rumors arise of a place to raise the king ad blot out the sun, both Trinity and Basil know they must do everything to stop it. Even if it means working together. Despite the betrayal and the threat, they find themselves drawn to each other. Love has no boundaries, especially in the face of danger. But will they be able to stop the ritual before it’s too late?

Or will the darkness capture them both.
EXCERPT #1:

She watched a group of young girls—and if they were of legal age, she would eat her shoes—stumble from the bar. They separated and two went off towards the street while the last wandered drunkenly down the dark alley.

Oh yeah, like this was going to end well.

“Five, four, three, two, one. Bam!” She shot her hand out just as a vampire jumped from out of the shadows and right beside the stupid young girl. Shaking her head, Trinity moved towards the screaming girl. Idiot.

“I don’t think you want to be doing that.”

The tall, gangly, greasy haired vampire jerked and spun around to face Trinity. His teeth were primed for the kill, his yellow eyes glaring at Trinity as if she were his next meal. The poor girl in his arms was wailing something awful.

Trinity lifted a brow, cocked her body to one side and rested her hand on her hip. “Jesus, could you have said anything more lame?

Let the girl go and no one has to get hurt.”

“How ‘bout I keep her and you wait against the wall until I’m done?” He jerked the girl towards him, yanking her head back to expose her neck. He was just about to bite down when Trinity placed a hand on his shoulder. He looked up and his face froze.

“How ‘bout I don’t.” Trinity bared her fanged teeth to show him she was not going to back off. “Beat it kid.” She clamped her hand on the vampire’s shoulder, her nails digging into his flesh as she jerked her head at the girl. As she’d suspected, the guy was a wimp.

He released the girl who immediately ran off screaming.

“Now, you wanna take off, or am I going to have to mess up that pretty face of yours?” she asked sarcastically as she glared down at him.

“You couldn’t handle me, bitch.” He slapped her hand free, then curling his fingers in a fist, threw a punch at her face.

She was ready and ducked out of the way. Slicing her hand up, she chopped him in the neck, sending him crumbling on the ground. “You don’t want to mess with me, jerk,” she advised as she planted a booted foot on his jugular. The razor blades she had attached to the toe drew a small amount of dull gray, deoxygenated blood as she pressed it just below his chin.

“Go ahead and dust him, he’s useless.”

Trinity glared over her shoulder at the man she had once been destined for and felt her heart ache. She couldn’t stop herself from admiring the beauty of the man before her. His long dark hair floated in the light breeze sweeping away from a face sculpted of fine bone and delicate skin. He looked so dark and dangerous in that long, black leather coat he always wore. One look into his translucent blue eyes turned her heart to mush.

Then she reminded herself how much she detested him.

To show she wasn’t a push over, Trinity pressed her foot harder, the razor blades cutting into the vampire’s neck. His arms flailed out, trying to yank her foot away from his neck. His legs kicked wildly, but

Trinity had a good ten pounds on the scrawny vamp. Tilting her toe downward, she sliced deep into his neck, finally cutting his head off.

In a whoosh he disintegrated into a pile of dust, his last breaths used to scream his way to death.

She took a deep breath, shook the remnants of a useless life from her boot then turned. “Basil.”

“Trinity.” They stalked each other like the predators they were, neither taking their eyes off the other. “You’re looking good.”

Her breath always caught in her throat when she looked into those icy blue eyes of his. Unlike the rest of her race that had yellow eyes,he had the color of his heritage. He was royal. “So are you, but you already know that. Was he one of yours?”

“Would I have cared if you dusted him if he was one of mine?” His hand slid to his pocket and he pulled the pack of cigarettes from his pocket. “How have you been?”

“Better now that I left you.” And wasn’t it odd how acrid a lie could taste?

“I noticed you’ve had your belongings gathered from our home.”

“Your home,” she corrected, keeping her distance from him. She knew perfectly well being close to him would have dire repercussions.

“Have you settled into your apartment, then?”

He was being so nice, so civil. She didn’t like it. “Why are you here, Basil?”

“I might ask the same of you, Trinity.” He lit the cigarette smoothly and the flame showed a devastatingly handsome face, with curves and lines and strength.

“I’m protecting the humans,” she remarked with an edge in her voice.

“Always the warrior, my fiery princess.” He smiled sweetly as he drew long and hard on his cigarette, then smartly blew a ring of circles in the air. All without taking his eyes from hers.

“Don’t call me that.” She hated when he called her that. Okay, once upon a time hearing him call her that made her hot, but that was then.

“It’s what you are and always will be to me.”

“Yeah, I was such a treasure, that’s why you decided to fuck another woman. Leave me alone, Basil.”

In a quick shift that surprised her, he was in front of her, his hand clamped on her chin as he tilted her face to meet his. “Despite my indiscretion, I will always love you.” He dropped his cigarette and ground it out beneath his boot.

She jerked her chin free, snarling, “You have a funny way of showing it.”

Grabbing her chin again, this time he held a little tighter. “Love has many sides to it, my sweet.” He sealed his words with a sharp kiss, his teeth scraping her bottom lip right before he vanished into the night.

Cursing, Trinity spat on the ground, wanting to eliminate his flavour from her tongue. Bastard thought he could come back and act as if nothing had happened. Fuck him! She still remembered all too clearly what it had felt like to walk in on him and the woman crawling over his naked body.

Shaking herself free of him, Trinity walked away. The last thing she needed was the memory of Basil’s kiss or the feel of his touch on her skin. What she needed was a vicious kill. If only she could find one. 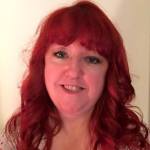 Raised on a rural farm in Saskatchewan, Canada, Shiela Stewart relied on her vivid imagination to fill her days. Never did she realize that her need to tell a story would someday lead to becoming a published author.

In the fall of two thousand and six, Shiela published her very first book and she hasn’t stopped since.

When not writing, Shiela spends time with the love of her life and biggest supporter, William. She enjoys doting on her children and granddaughter. She has a strong affection for animals which is evident in the five cats, one dog, plenty of fish and one turtle she owns.

Some of her other passions are home décor, crocheting and knitting.

Where to find Shiela: