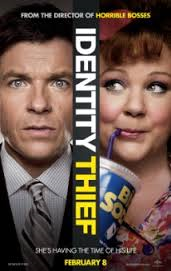 Since I was certain the movie would be silly, I actually laughed a few times when it surprised me. Having been a victim of Identity Theft though, it is not funny. It’s taken over a year to correct a fraudulent account and is still not resolved. It’s like the criminal is rewarded and the innocent is punished.

Moving on, the acting was good. Melissa McCarthy who played “Diana”, one of her many fake identities, was excellent. I also liked that neither main character gave in right away or easily. Jason Batman performed steadily as the “straight-man” in this comedy. I believe these two stars, especially Melissa McCarthy is what carried this movie.

The ending was satisfying – even though at points I wondered how they’d resolve everything.

Some parts of the movie were senseless, but overall it was a good movie.