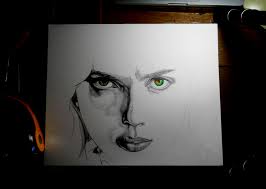 I was excited when I saw the Lucy movie trailer. Days and weeks ticked by while I waited for opening night. However, I was derived of what could have been an awesome movie.

I would have loved the movie more if they cut out the back and forth movie vs. nature scenes. And if they had gone much slower with her abilities. Explained more. Had more fight scenes instead of the giant leap to her being all powerful.

I almost felt like the entire movie was a trailer – a long trailer and they only gave you tidbits to peek your interest. It could have been so much better.

I’m glad I saw this movie, but would have been just as happy to wait for the DVD or the matinee showing.

Have you seen this movie? If so, leave your opinion in a comment.

ite childhood memories revolved around creating vibrant characters for her friends, and then acting out their adventures. Inside her fantasy worlds of darkened forests, dragon-filled glades, and iced islands, nothing was banned. From the ethereal Elvin to the most maligned Vampires, all were welcome in her fictional realities, a stark contrast to her home, where the magical and mythical was forbidden.