The Glass Orchid by Emma Barron is another wonderful full-length Historical Romance bundled as Time after Time from Crimson Romance.

A beautiful courtesan fighting to control her own destiny. A young man struggling to find his way in the world. Will falling in love mean sacrificing everything they’ve fought for? 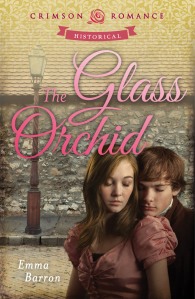 Orphan Adele Beaumont spent her childhood being passed around to cruel or indifferent relatives. She quickly learned the harsh lesson that a fatherless, penniless girl becomes an unmarriageable woman, leaving her alone and vulnerable to the whims of society. Determined to take charge of her own fate, Del decides to pursue the only means to an independent life available to her: become a courtesan to wealthy and powerful men.

Rhys Camden has just turned twenty one and is now employed as factotum in his father’s shipping company. He is eager to find his place in the world, but he finds himself fighting against his father’s control as the elder Camden seeks to increase the family’s social standing to match their newfound wealth.

After a chance meeting on a foggy street, Del’s and Camden’s lives become increasingly intertwined. Their passion for each other ignites and, realizing there can be no true freedom without love, they vow to defy society and family and risk everything to be together. But they soon learn how dangerous that defiance can be.

Suddenly, Camden was at the settee, looming over Del like an angry storm cloud. “Bloody hell, woman, why can’t I stay away?” He dropped on his haunches in front of her, searching her face as if it held the answers to his torment.

Del knew she should say something. She should lay a hand gently on his arm and murmur reassurances. Or she should feign outrage and righteous indignation and throw him out of her townhouse with admonishments to never darken her door again, so he would be released from his anguish by the knowledge that now he had no choice but to leave her alone. But she couldn’t. Like Camden, she was conflicted, torn between wanting him to go away and never return, and feeling like she would be empty if he ever left her.

Camden took her by the arms and pulled her toward him. His grip was strong and there was tension in his fingers, yet there was strange tenderness about him too. “Is it just me?” he asked, his voice low and husky. “Am I the only one fighting this madness?”

He leaned into her, and Del was warmed by the heat of his body, touched by the energy thrumming just below the surface of his skin. She simultaneously wanted to move closer to him until his warmth enveloped her, and to pull away before she was singed by his fiery restlessness.

“No,” Del said, her voice barely a whisper. She brought her hand up to his face, traced the rough outline of his jaw. “I can’t stop thinking about you, though it would be better for both of us if I could.”

He lifted her off the settee and brought her down to the floor with him. Her nightgown and robe were billowing out around her, pooling around her knees and tangling with Camden’s booted legs. He cupped her cheek with one hand, snaked the other arm around her waist and drew her tightly against him. Del felt trembling, but she wasn’t sure which one of them was shaking. He brought his face down to hers, his breath hot against her cheek, and Del parted her lips in anticipation. He hesitated for a moment, and Del knew he was still fighting himself, still fighting the attraction between him. Merciless, she threaded her fingers through his hair and brought her lips to his.

Camden made a strangled sound low in his throat, and then some of the tension in him eased, though he didn’t become relaxed. That energy was still there, pulsing harder, and Del knew he had given into it and would fight it no longer. He kissed her, hard, like a man long denied of sustenance finally getting his fill.

It was as if all her mental faculties had left Del. Normally in such situations, she felt little and thought much–touch him here, make a hungry noise now, don’t forget to pant heavily as if overcome with desire. All of it to create the illusion that she returned her lover’s ardor, experienced the same sexual passion. Now, here, with Camden, there was no thinking, no illusions, no careful control of her responses.

She had no control of anything.

Her entire body responded to him automatically, from the fullness of her lips to her genuine lack of breath. It startled and scared her, that her body had overtaken her mind, that she was not carefully orchestrating their every move. In her fear, she wanted to pull back, to demand he leave so she wouldn’t have to feel the burgeoning terror of an actual physical and emotional connection with someone.

Camden seemed to sense her hesitation, and he withdrew his lips from hers, though his thumb brushed lightly over her cheek. “Del,” he said, and that simple word, gruffly spoken, was her undoing. It was a question, an answer, a plea, and a pledge. It was infused with both an anguished longing that said he wanted everything from her, and a solemn promise that he would never take what she couldn’t give. It told her he was filled with a yearning for her he could barely contain, but that if she said the word, he would muster up an inhuman strength and walk away.

5.0 out of 5 stars The perfect summer read!
I loved the style of writing; very intelligently written, but easy enough to get completely lost in. This steamy love story is definitely not ordinary. I loved Adele Beaumont, a fiercely independent woman who protects herself by shutting out intimacy in her relationships. Rhys Camden is young man, obedient and earnest, trying to find and define himself having just turned 21 years old. They meet by accident and the sparks fly! This love story is hot, and you yearn for these two to finally give in to each other. The character development is beautiful. You get to watch two burdened souls, Adele and Rhys, find each other and eventually peel away their layers. The result is pure love, and each finds the inner peace that they didn’t even know they needed. What a wonderful book.
5.0 out of 5 stars Like a Vacation from Life
I loved this novel. Reading it was like taking a break from my life and going on vacation — to 19th century London. For a week, I experienced life through Adele Beaumont – fierce independence, blissful love and steamy romance, not to mention unspeakable fear and dread. Finishing the last page left me wanting more. I hope Emma Barron has more in store for us.
5.0 out of 5 stars Read this book!
I loved this book! The writing really drew me in, and the author had an interesting take on the usual romance novel characters. Del, the heroine, is experienced and independent, but yet vulnerable. Camden is younger and less experienced, but still strong and protective. I enjoyed reading how the characters dealt with their doubts about themselves and each other, and with disapproving society and family. I’ll definitely be looking for more from Emma Barron.
Available for Pre-Order Now! #99cents only. Check out 10 fabulous historical romance novels by 10 terrific authors Buylink: smarturl.it/TimeaTimeBundle

Emma Barron lives in upstate New York with her family and two dogs. When not writing, she’s usually chasing her daughter, starting house projects she makes her husband finish, or killing all the plants in her garden.