S is for Sphinx

S is for Sphinx 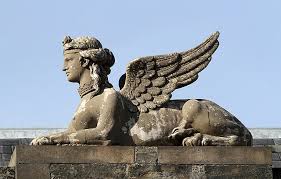 “A sphinx  is a mythical creature with, as a minimum, the body of a lion and a human head.

In Greek tradition, it has the haunches of a lion, sometimes with the wings of a great bird, and the face of a human. It is mythicised as treacherous and merciless. Those who cannot answer its riddle suffer a fate as they are killed and eaten by this ravenous monster.[1] This deadly version of a sphinx appears in the myth and drama of Oedipus.[2] Unlike the Greek sphinx which was a woman, the Egyptian sphinx is typically shown as a man (an androsphinx). In addition, the Egyptian sphinx was viewed as benevolent, but having a ferocious strength similar to the malevolent Greek version and were both thought of as a guardian often flanking the entrances to temples.[3]

In European decorative art, the sphinx enjoyed a major revival during the Renaissance. Later, the sphinx image, something very similar to the original Ancient Egyptian concept, was exported into many other cultures, albeit often interpreted quite differently due to translations of descriptions of the originals and the evolution of the concept in relation to other cultural traditions.

Generally the role of sphinxes is associated with architectural structures such as royal tombs or religious temples. The oldest known sphinx was found near Gobekli Tepe at another site, Nevali Çori,[4] or possibly 120 miles to the east at Kortik Tepe, Turkey, and was dated to 9,500 BC.[5]

It was said in late lore that Hera or Ares sent the Sphinx from her Ethiopian homeland (the Greeks always remembered the foreign origin of the Sphinx) to Thebes in Greece where she asks all passersby the most famous riddle in history: “Which creature has one voice and yet becomes four-footed and two-footed and three-footed?” She strangled and devoured anyone unable to answer. Oedipus solved the riddle by answering: Man—who crawls on all fours as a baby, then walks on two feet as an adult, and then uses a walking stick in old age.[6] By some accounts[7] (but much more rarely), there was a second riddle: “There are two sisters: one gives birth to the other and she, in turn, gives birth to the first. Who are the two sisters?” The answer is “day and night” (both words are feminine in Greek). This riddle is also found in a Gascon version of the myth and could be very ancient.”9

The Sphinx is also known in Burma, South India, Philippians, Thailand, and Mesopotamia.

The Garnet Dagger
← R is for Redcap
→ T is for Trow

2 responses to “S is for Sphinx”